Students participated representing The Democratic Republic of the Congo 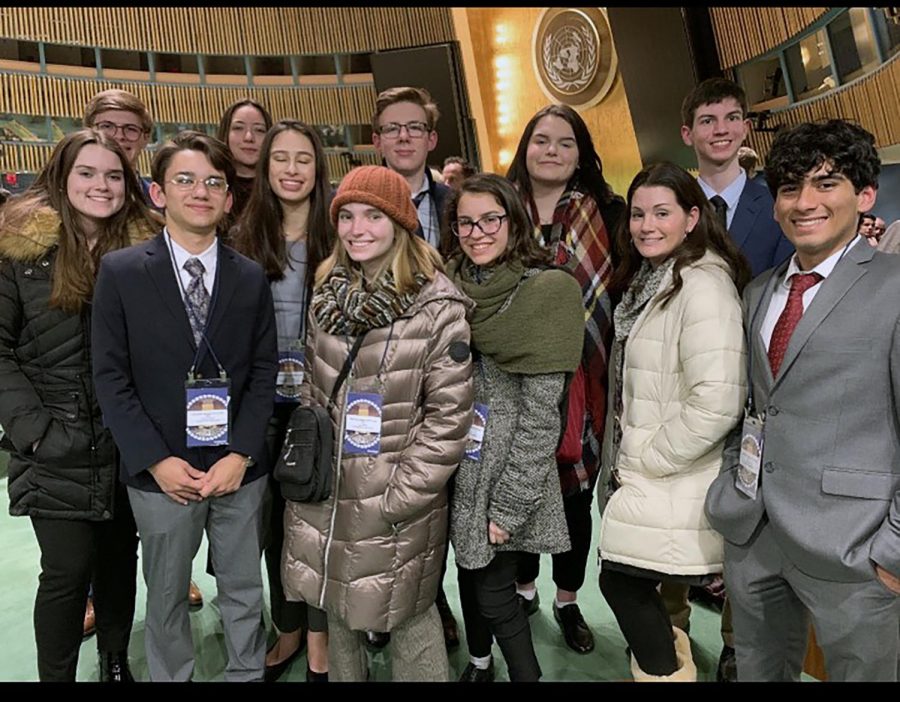 The group was able to visit the UN building for opening and closing ceremonies on their NYC trip Feb. 28.

Model United Nations, or MUN, is an educational simulation of the intergovernmental organization known as the United Nations (UN). By participating in Model UN students can learn about diplomacy, international relations, and the UN. MUN involves researching, public speaking, debating, and writing skills, in addition to critical thinking, teamwork, and leadership abilities. The club is sponsored by TWHS AP Psychology teacher Courtney Leone.

“I’ve sponsored the club for almost six years,” Leone said. “But even though we’ve been around for a good amount of time, this year was easily the best year of the club. In the past we’ve had trouble getting members to stay consistent and thus, we’ve never been able to do fun things like we did this year. The opportunity to go to NHSMU was incredible, and I truly believe this club is going to be really attractive next year, and for the years to come.”

NHSMUN is the world’s largest and most prestigious Model UN conference and it is hosted at the Hilton Midtown Hotel every year for the final weekend in February (which is Session 1) and the first weekend in March (which is Session 2). Not only do schools come from all over the country, but from all over the world. Last year alone there were over 1,200 people participating in the conference.

“Everywhere you go in the hotel, you can meet someone from a different country. I met new friends from Italy, from Japan, UK, you name it.”

This was the first year TWHS students were able to go to NHSMUN. After intense planning, their dream finally was made evident in early January. From that point on, the members spent many hours preparing for the conference. According to Leone, students have to write a position paper that states their country’s stance on the topic. They have to have thorough knowledge of their assigned country, policy and more.  And on Feb. 27, they left Houston for New York.

“When I found out we would have this opportunity to go way back in November, I couldn’t control my excitement,” junior Arin Calvin, said. “I didn’t think I would be able to go, due to the expenses of the trip, but once it became sure in January, it all ended out perfect. Going was the greatest experience of my life.”

The Woodlands students were in New York for four days. Though the majority of the time was spent at the hotel where the members were all in their separate committee meetings, they still had some free time to do things around the city as well.

“We got to do so many fun things,” junior Richard Grau said. “We went to the American Museum of Natural History, walked and shopped in Times Square, walked through Central Park, took the subway, along with many other things. It was so much fun.”

In committee, all members that went represented The Democratic Republic of the Congo in multiple committees, which focused on different world topics. For example, one committee spent the entire weekend talking about civilian and government relations with peacekeepers in Africa. Some of the other committees TWHS contributed to were: HR (Human Rights) , UNESCO (UN Educational, Scientific and Cultural Organization), CCPCJ (Commission on Crime Prevention and Criminal Justice), and SPECPOL (Special Political and Decolonization Committee). Each committee focused on a different world topic, and each had a member from the school there to represent The Democratic Republic of the Congo.

“We had only prepped and planned to go to one conference this year at The University of Houston in January,” Leone said. “It was the first conference for most of our members. The idea of going to an international conference in NYC was a far-fetched one; and it was only a month later! These kids worked hard to make it happen and it was a lot of work but an amazing and surreal experience. We can’t wait to go back! “

According to Leone, the club hopes to return to the conference, representing a  different country and debating new world political topics/issues.  Contact [email protected] for information about getting involved in the 2020-2021 academic year.