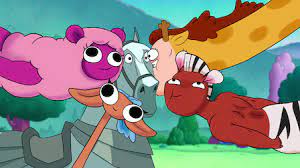 Horse and friends are the centerpiece of Centaurworld. The Netflix series premiered in July.

Netflix has proved time and time again that they do not care about the quality of their shows, but rather on quantity,. And yet every so often they manage to come up with these incredible, artistically rich, and outstandingly interesting concept shows or movies that are just a chef’s kiss away from being a perfect meal. Centaurworld is no stranger to this phenomenon.
Centaurworld is a comedic musical animated series that was released on Netflix on July 30. It was created by Megan Nicole Dong who also voices one of the characters in her debut as a director and second role as a voice actress. Dong started working in the animation industry as a storyboard artist on shows like The Adventures of Puss in Boots (2015) series and the animated hit movie Captain Underpants: The First Epic Movie (2017). It features the voices of Kimiko Glenn as Horse, Megan Hilty as Wammawink, Parvesh Cheena as Zulius, Chris Diamantopoulos as Chet, Josh Radnor as Zulius, and, of course, Megan Nicole Dong as Glendale.
The plot revolves around a horse appropriately named Horse who lives in a world that has been in a devastating war from ever since she could remember. She has a rider (who she calls Rider) that exists as her companion and only friend in this world., until Oone fateful day while retrieving a magical item that could help them win the war, Horse gets transported into a strange and mysterious world full of magic and vibrant colors called Centaurworld, where she meets a ragtag team of different kinds of centaurs who decide to help her get back to her own world and find Rider by collecting parts of a key to a portal from five different shamans. It’s a relatively simple fetch-the-macguffin plot that only feels complicated because of the sheer ridiculousness of the world it takes place in.
Although we don’t spend a lot of time in the war-torn world of Rider and Horse, the stylistic choice to make it color-muted with sharp lines and a sense of realism provides a big contrast to the colorful and bouncy cartoon that is Centaurworld, which more closely resembles something you’d see on Nick Junior. It’s like bouncing from the grounded world of Avatar: The Last Airbender to the silly world of The Backyardigans. I absolutely love the distinction between these two worlds, especially since the artists didn’t go out of their way to make Centaurworld a complete and utter eyesore and it creates a nice distinction between characters from each respective world. Somehow the artists on the show managed to create two distinct art styles and make them fit in the same universe consistently and I am honestly all for it.
However, Centaurworld doesn’t just shine on its rich art styles;, it also has some of the most compelling characters in modern animation shows. Our main cast consists of six centaurs, each being a mix of human with a different animal, and a horse. The dynamic that these guys form with each other is incredible as each character, no matter how silly they might seem on the outside, is incredibly believable. I found it completely believable that these characters would come to love each other like a family and I love the incredible dynamics they have with each other individually. There’s a continuous feud between Chet, the bird centaur, and Horse that hints at Chet being somehow jealous of Horse’s big physique., and Iit’s a little annoying how he goes out of his way to mistreat her for the first half of the series, but as it goes on we get a more clear picture as to what it is that his problem is. Chet doesn’t hate Horse, he just isn’t good at articulating his feelings so he lashes out as a bully to the people he cares about, and sometimes slips up when trying to insult someone. Pretty much every character is three-dimensional and the show pokes fun at that idea in an episode that was dedicated to developing Zulius the zebra centaur. They all have their flaws, yet they still love each other in spite of them and there’s something about that that is so charming to me.

Their relationships come to light even more with the songs, oh God the songs. Look, I’m a bit of a nerd when it comes to musicals, but I ought to warn you that if you’re not into that kind of media, then you might want to sit this one out. The songs aren’t necessarily bad, in fact (some of them I like quite a lot), but they are very show-toony in nature, and if you’re not into the characters bursting into singing and dancing for a minute or two three times every episode, then it’s not for you. However, I still love most of the songs. There’s this tune near the end of the series that’s not even integral to the plot of the series that concerns a secondary character called Comfortable Doug. That song was a complete showstopper. But my absolute favorite song in the entire show is “I Don’t Know Him” by Zulius, sheerly because of the amount of implication it adds to the character. It really makes him shine as more than just the sassy, probably gay best friend.

And no matter how cartoony and over the top the style of the show can be, it still deals with a lot of heavy topics.[/pullquote] The entire plot revolves around Horse trying to get back to Rider, but a sense of urgency is added when she starts to forget what she was like. And it genuinely feels sad to see her go through her journey fearing that she’ll forget the only person she’d had a connection with up until that point in her life,. bBut the show doesn’t stop there. There’s a whole episode dedicated to self harm, and how repressing your emotions in order to not feel sad isn’t going to help you deal with your problems. You could see it as just another spin on the whole “be happy you’re here” spielschpiel, but trust me, it hits hard.
Overall, Centaurworld is a fun over-the-top cartoon series with banger songs, an enticing story, interesting characters, beautiful world style, and great introspective into hard topics. However, it does sometimes suffer from the fact that it is still a kid’s show, and that’s completely fine, but it’s definitely not going to be everyone’s cup of tea. However I’d definitely recommend it to everyone I know. It’s a solid 9.1/10 right there. Give Megan Nicole Dong the fresh baked homemade cookie she deserves.